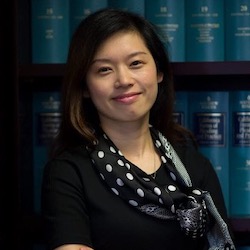 Penny joined Derek Lim’s team in July 2017. Her expertise includes assisting with family-based immigration as well as employment-based immigration for large and small companies. She additionally has expertise in handling personal injury cases. Penny serves as a liaison between attorney and clients while providing timely and professional service to all.

"Penny is pleasure to work with. Though she has lot of work load but she has always greeted warmly and have responded my queries professionally." - Deep K. (Testimonials)

Penny, alongside attorney Derek Lim and senior paralegal Christine Chao, have handled multiple immigration cases, including L1, H-1B, E1/E2, PERM, family-based petitions, and other nonimmigrant visas. In addition, Penny has aided the attorney on complex immigration matters, such as Violence Against Women Act (VAWA) claims, I-601 waivers and appeals. Clients have frequently lauded her consistent communication and periodic updates regarding their case.

Before joining the Law Office of Derek Lim, Penny worked as an attorney and practiced law in China for more than three years. She is also fluent in English and Mandarin Chinese.

In her personal time, Penny enjoys traveling and spending time with her family and friends.

Contact Us
Practice Areas
Client Reviews
★★★★★
"My father was hit by a car when he was cross the road close to a grocery parking lot last year. Although he was not seriously injured but he still spent months in hospital. We needed a lawyer to help to deal with the insurance issues. Luckily we found office of Derek Lim for their professional guidance. Christine handled everything professionally and made the whole process easy for us so we can focus on taking care of my father. We are satisfied with their service and results and highly recommend them to anyone who needs an accident lawyer." Yun J.
★★★★★
"Law office of Derek Lim did an excellent job on settling my personal injury case. I look up their ad online and I called their office about my car accident. Mr. Lim came to my home the next day to obtained all the info. They settled my case promptly. I am very pleased with the settlement and highly recommend Law office of Derek Lim." Janice C.
★★★★★
"We had Derek help dealing with a car accident case. Derek and Christine were very responsive. They handle everything with the insurance company and gave clear guidance on all questions that came up. We were very satisfied with the service we received and we highly recommend Derek and Christine if you need help from a professional law office." Yin Yin W.
★★★★★
"We had 2 car accident cases which both handled by Christine at Derek Lim. They are very professional, I highly recommend that you give them a call, they will handle everything with the insurance company and hassle free." Kris L.
★★★★★
"Hi Mr. Lim, I want to spread the good news to you that my brother has obtained the immigration VISA, see attached. Thank you very much for your great assistance and consistent support along the way." Ada T.
View More
Submit a Law Firm Client Review